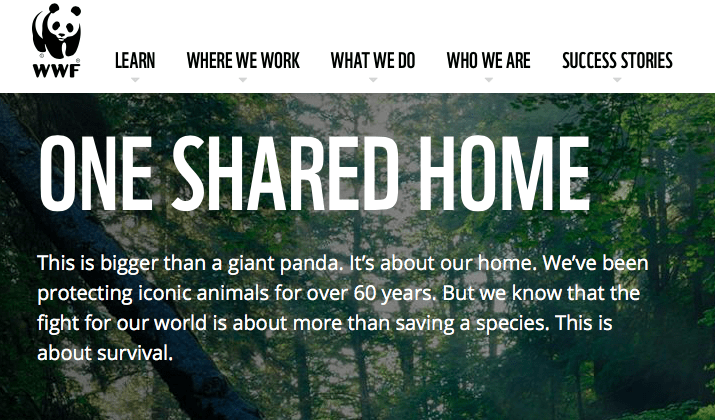 What do Tesla, Oxford University, and The Economist have in common?

They all use Drupal enterprise to power their websites. Infact, several leading organizations, and non-profits like

Founded in 2001, Drupal is the biggest open-source web content management system (CMS) used to build e-commerce websites and applications of all sizes for enterprises. Drupal development not only boosts user experience but also enhances website performance.

Drupal’s cutting-edge features and functionality include:

“Dorp” is a Dutch word that means “village”. This signifies the small community that Buytaert and his classmates started. However, when Buytaert was typing the word, he misspelled it to “drop” and drop.org became live on the web.

The Drupal logo, known as druplicon, was designed by Steven Wittnes and Kristjan Jansen. The community started to evolved and also turned into a personal experimentation environment (with a focus on web technologies) due to discussions and innovative ideas from the audience.

2001: Drupal 1.0, which began as a message board written by Dries Buytaert, became an open-source project. In the same year, new features were introduced in Drupal 2.0 and 3.0, improving core functionality.
2002: Drupal 4.0 was launched with the taxonomy module. Drupal 4.1 to 4.7 were released subsequently including the first e-commerce module (4.4) that featured a profile module, a theme template,customizable forms etc.
2003: Presidential candidate Howard Dean used Drupal for DeanSpace. This helped lead to a 300% increase in content activity on Drupal.org.
2004: CivicSpace Labs, a company with full-time employees started developing and distributing Drupal technology for the first time.
2007: In Drupal 5.0, developers made the administration area more customizable and better organized.
2008: Drupal 6.0 was launched and presented many improvements related to usability and performance. Over the next 4 years, Drupal went through 22 sub-releases. Also, the Drupal.org website hosted over 1.4 million downloads of Drupal software.
2011: Drupal 7.0 was launched with an entirely rewritten database layer and various security and usability changes.
2015: Developers launched Drupal 8.0, where they significantly improved the front end as well as the entity system and made the site administration experience simpler.
2020: With the launch of Drupal 9.0, some technical changes were implemented. A new version also made it easier to update websites built in Drupal 8.8 and 8.9. 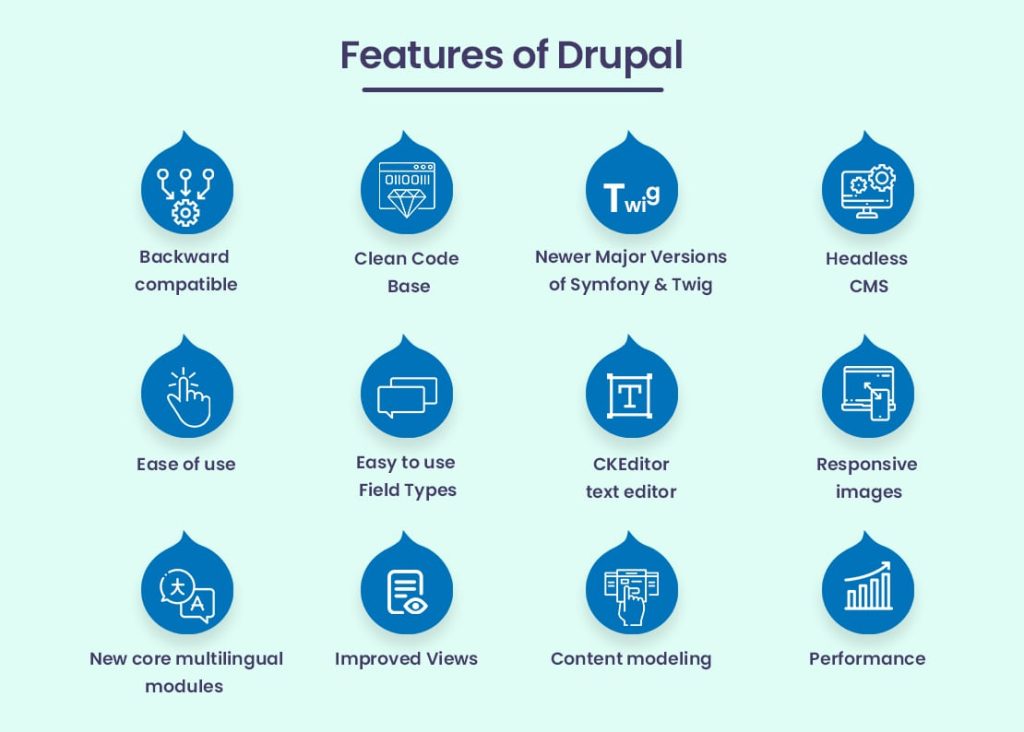 We have listed the key features below that can help you create flexible, scalable and secure websites.

Why choose Drupal development? Drupal enterprise benefits from the scrutiny, maintenance, and ongoing input of developers globally, as well as a dedicated staff team of security experts who work together to address and release security fixes on a regular basis. Drupal’s strict coding standards and community code review process prevent many security issues entirely.

Critical sites and applications prefer Drupal enterprise because it has been thoroughly tested to meet the most stringent security requirements. Banking, governments, public administration, and healthcare industriesare adopting Drupal at the fastest rate due to its security measures.

What Drupal’s security features include?

With Drupal’s automated language translation, you can reach out to a variety of audiences with localized content. Your messages and information can be customized to target geographic areas, audiences and languages instantly and seamlessly.

Drupal web development company can also detect a user’s preferred language based on their IP address, browser settings, URL, session, and other factors. Drupal enterprise also supports languages that use a right-to-left text direction like Arabic, Hebrew, and Farsi.

Drupal enterprise is used by large enterprises that require multi-channel sites with custom content, such as Pfizer and weather.com, as well as sites that experience higher traffic, such as the GRAMMY Awards and the NBC Olympics.

Organizations can use digital integration to advance marketing communication across multiple channels. Tasks such as emails, social media and analyzing target audience and delivering the right content at the right time requires automation as it saves time, money and effort.

You can use modules to assign rules for automated marketing to these visitors. For example, sending an email offer in response to an abandoned cart, adding vissitors to a specific list, or using AI applications like a chat bot to deliver information.

Integrating marketing automation platforms with Drupal enterprise can help you with:

With Web services support, Drupal functions as a content system that’s accessible through an API. The authoring experience in Drupal enterprise features in-line editing and better WYSIWYG (what you see is what you get) that streamlines the content creation process.

How can your business benefit from Drupal’s content authoring?

You can use Drupal enterprise to create a unique, personalized profile for each visitor based on geolocation, browser history, device type, and behavior taxonomies. Based on a user’s clicks and decisions at each data point, you can get a better picture of who they are and what they’re looking for.

With real-time behavioral profiles, you can display a targeted marketing message, case study etc. for your prospect to increase conversions. Drupal’s personalization feature has many benefits including:

Is Drupal open source? The term open source refers to software that has its source code made public. Users and developers are allowed to use and modify it under certain conditions. Drupal is highly customizable as compared to other CMS platforms. It provides many custom built options like designs, layouts, operations and modules.

Developers and designers can fully customize your Drupal enterprise according to your business goals. Drupal has more than 48,000 modules and allows you to implement additional features into your Drupal website like social media, CRM and SEO.

What makes open source technology so popular and beneficial?

One of the most comprehensive open-source CMSes available, Drupal, is the perfect fit for e-commerce businesses. With Drupal enterprise, you can manage your content, integrated marketing, payment, and fulfillment tools that will help in:

Drupal enterprise helps you reach a wide audience as it provides accessibility to special people with a range of disabilities. Websites like paralympic.ca, specialolympics.ca use Drupal. Some of the accessibility features included in Drupal 8 and the forthcoming Drupal 9 include:

Following are the benefits of Drupal’s accessibility feature:

Is Drupal a CMS? Drupalenterprise offers a preconfigured development environment that supports full-scale digital content lifecycle management with its multisite and Content-as-a-Service (CaaS) functionality, also known as headless or decoupled.

Drupal enterprise helps you in:

Drupal 7 was released on January 5, 2011, with launch parties held in several locations. Following that, Drupal 5 maintenance was discontinued, with only Drupal 7 and Drupal 6 remaining.

With the release of Drupal 7, there were many new features and upgrades for both developers and users to make the most of this content management system. Drupal for Developers: Drupal 7 has greatly aided developers through improvements in themes, modules, multi-support, and so on.

Drupal 8’s first release candidate (rc1) was revealed on October 7, 2015. Drupal 8 includes upgrades for both users and developers, such as a revamped user interface, in-place editing, and enhanced mobile support.

Also, key contributed modules such as Views, Date, and Entity Reference have been added and improved. A new object-oriented backend leveraging Symfony components has been introduced. In addition, configuration management has been revamped and multilingual support has been improved.

Drupal 9 was launched on June 3, 2020, following the introduction of a new development approach in Drupal 8. Organizations that are currently utilizing Drupal 7 or Drupal 8 may want to migrate to Drupal 9 for a variety of reasons, the most important of which is security and support.

The original release of Drupal 9 did not include any new features, but it did have a leaner, more secure system, support and easier-to-use APIs.

Based on Drupal 8, Baker-Electric provides electrical contracting services throughout Southern California. Baker Electric is able to provide quality and innovation with its redesigned Drupal enterprise.

With PROS Drupal development company, Baker-Electric created a custom made Solar Calculator that helped businesses and households to calculate how much they can save on their electricity bills.

Moreover, we integrated a custom plugin for employees to submit projects and get them approved by administrators, that way businesses save a lot of time and resources.

Based on Drupal 9, Tesla is one of the world’s most talked-about firms today, having pioneered the development of electric motors and sustainable energy.

A billion-dollar corporation’s website should be extremely sleek, professional, and highly successful at showcasing its products. The power of Drupal development was used to do this.

Drupal 10 will be a refined version of Drupal 9 and will be released in December 2022. What will be included in Drupal 10?

Key features that will be included in Drupal 10 are as follows:

Vartheme BS4 (soon to be Vartheme BS5) is a great theme for enterprises and SaaS businesses. It also has some really unique features, such as background films and photos, subjects and clusters, etc.

Barrio is a Base Bootstrap 4/5 theme. It’s essentially a blank layout page that you can fill with Bootstrap CSS codes to make whatever Drupal 8 or Drupal 9 theme you like. Barrio has been used to build many themes, including Vartheme, and they all have one feature in common: great performance.

Barrio allows you to get creative and create your own unique Drupal theme look if you are familiar with coding and CSS. 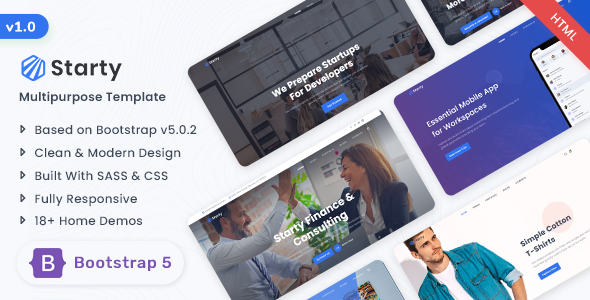 It is just a collection of organized files that define your website’s visual appearance. But it’s completely empty! As a result, even if you installed it on your website, you would just see an empty page as a design.

The X theme, created by Drupal, is a simple, minimalist, and clean theme. The X theme is compatible with both Drupal 8 and Drupal 9. And, despite being owned by Dupar, it is not dependent on it or any other third party.

In other words, by adopting this theme, you take entire control over how it is used, and thus how it responds and performs. Drupal enterprise is used by at least 360 websites, and no problems have been reported so far. This means that the X basic theme is a good place to start.

Vani is a mobile-first theme that is clean, responsive, fast-loading, and uncomplicated. It’s not as simple as the previous ones, but it’s also not ready for professional use. However, it is easier to adapt and edit, even without CSS coding.
The theme is free and built with Bootstrap 4.

How PROS can help you with Drupal

PROS is an award winning Drupal web design company. Our professionals have an experience of 20+ years in internet marketing, development, and design, SEO, social media marketing, and e-commerce.

PROS Drupal development consulting company has designed thousands of professional, creative, and corporate Drupal websites. We have a demonstrated track record of success in all business verticals, from small firms to large organizations. Our Drupal web design experts offer a high-performance development plan to help you build a powerful user experience.

In 2021, Clutch awarded us with one of the top web development companies and named PROS as Top Drupal Developer in San Diego!

PROS Drupal development company has designed and developed many complex Drupal enterprise websites including Baker-Electric. Get in touch with us today.

With Drupal enterprise, businesses can scale up by taking advantage of the powerful features that it has to offer. With advanced security, multilingual support, content authoring, personalization and much more, Drupal is the best open-source CMS platform.