What is Food Waste and How to Reduce it

Most people don’t realize how much food they throw away every day — from uneaten leftovers to spoiled produce to parts of fruits and vegetables that could be eaten or repurposed.

Wasted food is the single most common type of material found in municipal landfills, and it represents nutrients that could have helped feed needy families. Furthermore, the water, energy, and labor utilized to make wasted food may have been used for anything else. 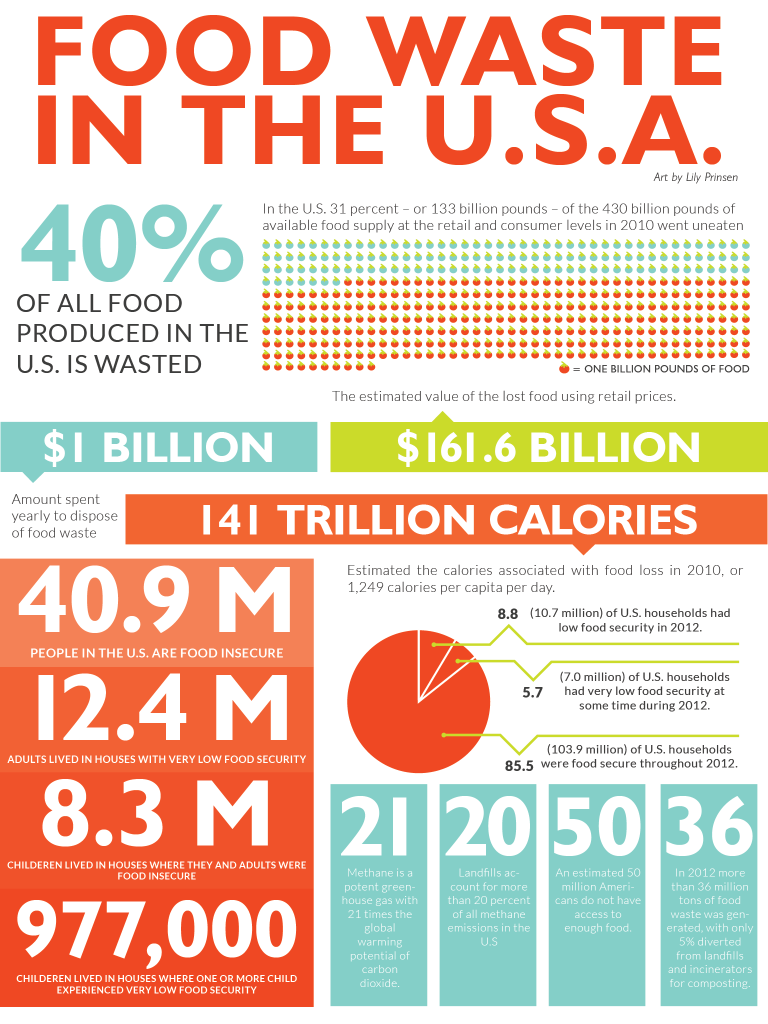 Feeding America & how to donate

Feeding America is a United States–based nonprofit organization that is a nationwide network of more than 200 food banks that feed more than 46 million people through food pantries, soup kitchens, shelters, and other community-based agencies.

In the mid-1960s, during rehabilitation in Phoenix, Arizona after a paralyzing injury, John van Hengel began volunteering at a local soup kitchen. He solicited food donations and ended up with far more food than the kitchen could use. Around this time, one of the clients told him that she regularly fed her children with discarded items from a grocery store garbage dumpster.

Click here to donate to Feeding America today and help save lives.

How much food is wasted in the USA?

How much food do Americans throw away? Consider the following “food for thought”: While the world loses over 1.4 billion tons of food each year, the United States throws out more food than any other country: nearly 40 million tons — 80 billion pounds — each year.

Why do people waste so much food?

Prior to COVID-19, it was estimated that 35 million individuals in America, including 10 million children, were food insecure. 8 Due to the pandemic’s employment and financial consequences, that figure is likely to rise to as many as 50 million people9 by 2022. With so many people in need of basic food, why do Americans waste so much of their food abundance?

While the food waste movement in America is gaining traction, it needs to accelerate in order to assist & resolve one of the world’s most serious issues: climate change.

Be thoughtful and deliberate when eating out.

Recognize that portion sizes vary and order only what you know you will consume. If you have leftover food, which is common with today’s big American food portions, take it home to share with others or to enjoy for another meal the next day.

Bring your own containers to take leftover food home if you are truly concerned about the environment. You’ll be helping to reduce the 150 million tons of single-use plastic that we use – and trash – each year.

It encourages people to take out more food than they can possible eat, and that food is nearly invariably tossed out mindlessly after piling a plate full. Food waste from restaurants is a larger issue and requires attention.

When it comes to managing food waste, several countries throughout the world are ahead of the United States. France, for example, requires restaurants to contribute food that is about to be thrown away but is still edible.

Cities in Sweden use food waste to generate fuel for public bus transportation. In Denmark, you may use an app to locate eateries and bakeries that are about to close and buy their remaining food for a fraction of the price.

This goes back to the old saying of “take only what you need.” We will waste less food if we buy and produce less food. Simply said, this is about decreasing waste by avoiding creating it in the first place.

Much of what we throw away is perfectly edible. This is intolerable, with 50 million people expected to be food insecure in 2022 alone. Food banks and shelters across the country would gladly accept the food that many Americans discard.

Humans aren’t the only ones that require nourishment; our animals do as well. Those food scraps we throw away after dinner, which will inevitably wind up in a landfill, can be collected and fed to farm animals, diverting even more food waste from being thrown away.

Did you know that part of the food you throw out can be converted into biofuel and bio-products that can power your car? The sun and wind have supplied alternate energy sources. Why shouldn’t our food be another source of energy?

Composting food waste is near the bottom of the Food Waste Recovery Hierarchy and is something that everyone is capable of doing. Composting not only keeps your food waste out of the landfill (and therefore reducing greenhouse gas emissions), but it also improves soil and water quality, which helps future crops grow.

This is the bottom of the Food Waste Hierarchy – and our last, last resort for waste. Avoiding this tier begins with everyone of us, by eliminating waste at the top of the tier – exactly where it’s sourced and where we have control over how much we consume, buy, and create.

Climate change is real and happening as we speak. With a large number of the global population at risk of malnutrition and starvation, countries around the world should devise a plan to reduce food waste.

A proper mechanism will help millions around the world get better nourishment. It is about everyone, from individuals to major organizations, doing their part — accepting responsibility and making tiny changes to produce meaningful, long-term changes for the planet.